A double top is the formation of a pattern that looks like the letter M or the heads of twin babies hugging. After a period of an uptrend, the pattern is formed by two consecutive peaks that are almost equal to each other, with a “valley” in between. This usually means that the pair has finished moving up and that now we could be expecting its price to go down. 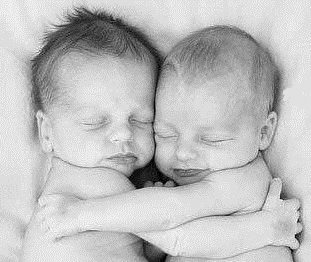 The “tops” are peaks that are formed when the price hits a certain level that can’t be broken. The story behind the chart in Figure 12-3 is that the pair was moving up strongly until it hit an obstacle, the 1.2625 level. This formed the first top. Since the pair was very stubborn, it decided to go back, gain energy, and try that level one more time. This formed the second top. It’s a shame, but the pair couldn’t make it. So the two currencies got upset and said to each other: “Since we are not able to continue up even with such a powerful uptrend, let’s just turn around, switch directions, and show those traders who they are dealing with!”

And that was the beginning of a new downtrend.

Now, this scenario happens a lot! So just by knowing this behavior of currency pairs, you can predict the beginning of a new downtrend once you have identified a double top.

But wait a minute. I know what you are thinking. We should never rely on only one signal before making a trading decision. We should pay close attention to whether or not the pattern has been confirmed by a subsequence break of support (the neckline). Once we see that, we can place a bearish entry order below the neckline (sell order) and hope that the price will stick to the pattern and go down.

An example of my short-term bearish forecast using a double top technical strategy was reported on the Forex Diva Report of September 5, 2012, helping me to keep face in front of you guys. Look! 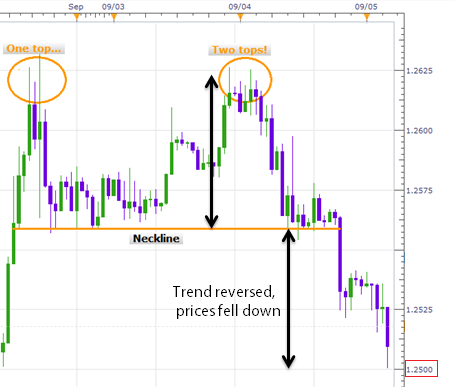 I set my stop order carefully to avoid risk in case the market moved against me. In addition, experience shows that the distance between the peak and the neckline is almost the same as that between the neckline and the lower end of the pattern. So I simply set my buy order at 1.2500 and went to a charity event with some friends. When I came back, the money was mine!

Become a master of trading! Get Invest Diva’s books now!

What happens next? After a double top pattern is completed, the previous support level that was broken will often act as a resistance level. You see, everything we’ve been learning is coming together.

And the even better news is that by practicing on free demo accounts, you will be able to identify all these patterns in less than a second. Here is another story of a double-top. Next story should be written by you on the Invest Diva’s discussion group.

A Story of a Long-Term Double Top Formation Once upon a time, a currency pair was in an uptrend from point A to point B. It then hit a resistance level and subsequently drifted downward for about a month. Then it peaked once more at point C, but it plummeted right afterwards and formed a double top pattern. A wise trader waited for a confirmation to signal that the trend had indeed reversed. The confirmation would have been issued by a break of the support level seen at point A.

However, the ending of this story was lost in the database, and whether the reversal was confirmed or not remains a mystery.

Note: It is normal for both peaks to form at the same price level, but it is also possible for the second peak to slightly exceed the first or to top out just a little below it.